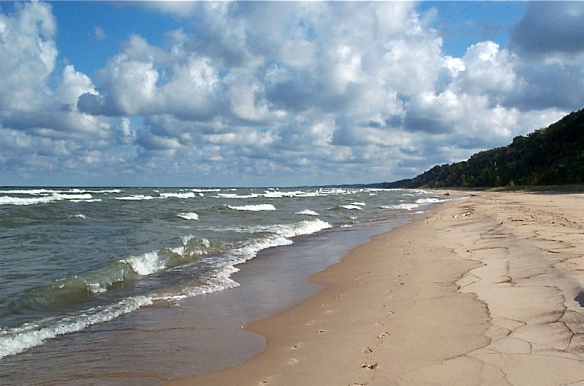 I am lucky to have access to the bountiful harvest in Michigan (U.S.A). where Lake Michigan’s moderated climate, open land and the “Green Revolution” combine to support diverse agricultural production. The diversity is impressive; in the U.S., Michigan is second only to the much larger state of California.

Prevailing westerly winds off beautiful Lake Michigan cool us in the summer and warm the area in winter — extending the growing season.   While only an hour and half drive from downtown Chicago, Illinois, the land near our home is primarily farmland – with fields of corn, asparagus, cucumbers, onions, blueberries and apples.

This agricultural abundance is dependent on climate, but much of it is sustained by modern hybrid seeds (including genetically modified), irrigation systems, fertilizers and pest management — i.e., the “Green Revolution” technologies.

Culinary Science Note:  The Green Revolution*.  The “Green Revolution”, the application of modern farming techniques, is not unique to Michigan, but has been widely practiced throughout the world, beginning in the late 1960s.  While some claim the “Green Revolution” is environmentally damaging, with proper application, such damage is minimal and, in some cases, will even produce environmental benefits — such as water conservation.  More important, it has improved the quantity and quality of our food and allowed us to feed most of our growing world population. Although opponents of the Green Revolution are reluctant to admit it, even the delightful bounty at our Michigan farm shops is likely to be the output of “Green Revolution” technologies.

If you are shocked that, as a hard-core foodie, I am a supporter of the “Green Revolution” and big-company technologies, let me explain.

When I was a teenager, still living with my parents,  I was already intrigued by science and found early inspiration in Rachel Carson’s book, Silent Spring (1962).  The book makes excellent points about damage to our environment from reckless application of modern chemicals and technologies, points that remain valuable today.  However, the book gave the impression that all modern chemicals and technologies were harmful, leaving my young brain with a lopsided view of environmental issues.   I can remember ranting to the point of near-tears when my father (an excellent gardener) used pesticides on his garden.   To him, I was like a fly buzzing around his head — an annoyance but not enough to change his plans.   So, I ranted all the more.  I claimed that he was surely poisoning himself and everyone around him – including me.

Many years later, as a scientist (pharmacology/toxicology),  I (still alive, by the way) realized how silly I had been.  First, my father did not poison himself; he is still living — age 96.   Second, I now know that good science first asks a question and then investigates and reports all sides of an issue.  Looking at the science objectively, it is difficult for me to conclude anything other than net benefits from the “Green Revolution” — even though it includes the judicious use of pesticides and modern technologies.

My more recent culinary experience, has inspired my love of “farm to table” food.  What this means is that I now seek out and utilize as much locally-produced food as possible — food from my own garden or from local farms and farm shops.

Does this does mean I should now oppose “Green Revolution” technologies, which feed much of our world and enhance the quality and quantity of our foods??  No, it does not.  “Farm to table” food is independent of the distinction between “organic” or “produced by modern farming technology” — as both (mostly the latter) are found in our farm shops.   I purchase both – making my choices based on freshness, appearance and taste.  I really don’t care that my zucchini (courgette) was produced by a virus-resistant seed;  after all, that’s part of what got it to my local farm shop .  If my purchase is from the smaller selection of “organics”, that’s great, but I view “organics” as a privilege.  You can not feed the planet with “organic” food.

OK!  You’re right. I used my food blog to pontificate on one of my many scientific views, and it probably isn’t the last time I’ll do so.  But I’ll stop lecturing for now, and move on to my summer salad – a blend of Michigan farm produce as well as peas and basil from my own garden.

A recipe isn’t really needed for a summer salad, as it should be the best of available produce, whatever that may  be.   I like to serve it with a simple vinaigrette — as this will give your salad a bit of tang and flavor without overwhelming the subtle taste of the produce.

The key here is to:

Here are some tips for some of the salad ingredients from my bountiful harvest:

If you don’t already have one, invest in a salad spinner.  I wash lettuce (small pieces or cut pieces) in cold water and then soak it in more cold water (10-15 minutes) in the spinner to crisp.  Limp lettuce will often perk right up from this process.  Sturdy lettuce will get crisper. Then use the spinner for it’s intended purpose to get it as dry as possible.  Water doesn’t add anything to the flavor of a salad.

Store unused, washed lettuce loosely packed in a container lined with a damp towel (paper or cloth).  This keeps a bit of air and some moisture around the lettuce, retaining freshness. 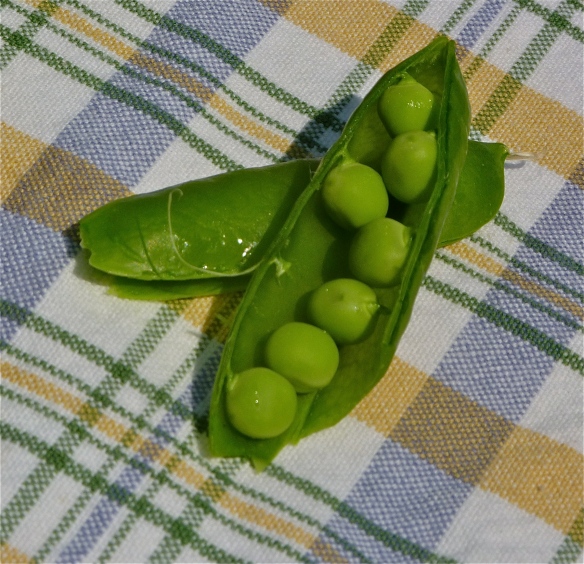 Peas – Fresh from the Garden

Frozen peas have their place.   I don’t know what I would do without them in winter, when I use them to add color and flavor to so many dishes.    But fresh, local spring or fall peas (they don’t like the heat of summer) are a different animal completely, at least as far as I’m concerned.  They are sweet and without the pasty texture.   As with corn, once shelled, you can eat them raw or place in boiling water for just a minute, followed by a quick chill.

The peas shown here are the Little Marvel variety.  They have tough pods and are intended for shelling, unlike snap peas. 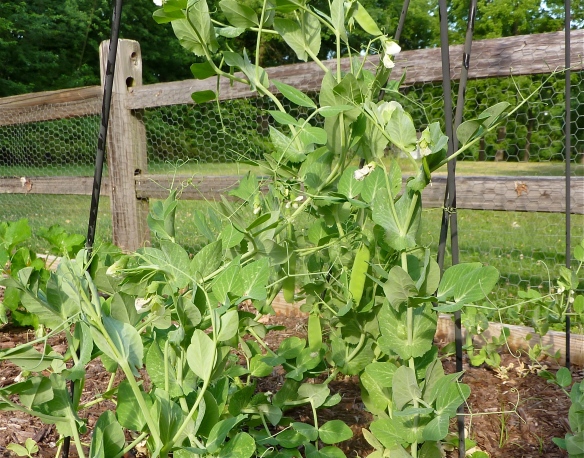 In season, grow your own or get local vine-raised.  In the winter months, I find the medium-to-small Campari tomatoes have the best texture and flavor — sweet, juicy and no core to remove.

Do NOT store whole tomatoes in the refrigerator as they will lose their flavor.

Summer corn is, of course, corn on the cob.  It is best eaten fresh — really fresh.  I try to buy corn within a day of when I’m going to use it.   At the farm shop, I always ask where it is from and when it was picked — as freshness is so important with corn.

Fresh corn in salad does not need to be cooked, but about 20 seconds in boiling water followed by a quick cooling will bring out the color and sweetness.  Then slice it off the cob and you’re all set.

Store, but not for very long, in the refrigerator.

I also like summer squash raw in salads.  Wash thoroughly and slice/chop with the skin on to retain the color.

I like these raw in salads too.  However, when I’m cooking for others, I blanch green beans.  Most people don’t like the rugged crunch from raw beans.

Most people don’t think of herbs as typical salad ingredients.  If you haven’t tried it before, give some chopped basil, chervil or marjoram a chance in your next salad.

Fresh-cut herbs can be stored in the refrigerator like flowers in a vase, with a bit of water at the base, or wrapped in a damp towel (and then in an air-tight container). 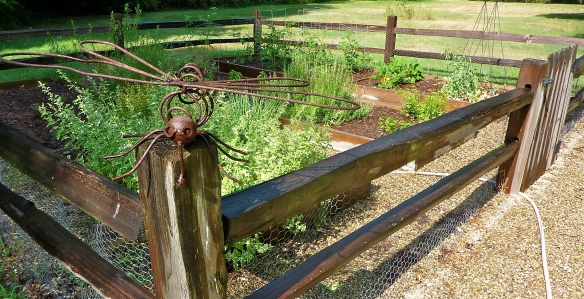 My kitchen garden isn’t large, but it has space for the basics — a steady supply of fresh herbs, tomatoes (which are best out of your garden), peas, and a mix of squash and peppers.  I don’t tell my father, but I do occasionally use a bit of pesticide – only if absolutely necessary….

*  The Green Revolution.  For more on this topic, I would start with the retrospective look by the person credited with inspiring this Revolution and Nobel Laureate, Norman E. Borlaug (link here and above).   It includes a summary of the Green Revolution as well as information on progress and a look into the future.  I also like the writings of Thomas D. Gregori, a University of Houston Professor who published a book on the topic entitled “Bountiful Harvest”.   For further information, there is a good list of references in the Borlaug article, and there are many publications from opponents — easily found via your favorite search engine.